Saturn's rings lie between a pair of moons in this Cassini spacecraft view that features Mimas and Prometheus.

Lit terrain seen on Mimas is on the leading hemisphere of the moon. This view looks toward the northern, sunlit side of the rings from just above the ringplane.

The original is a composited creation and obviously "Mimas" has been added to the image.

Just to try and put this into perspective ... 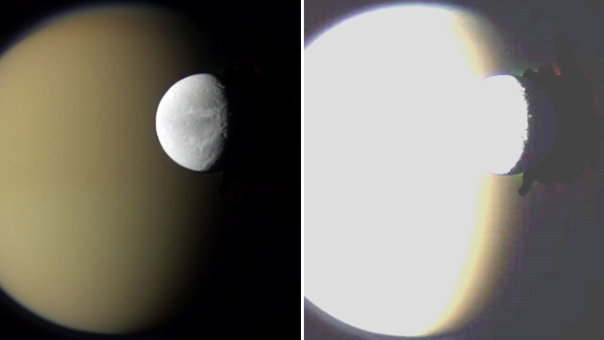 Alien conspiracy theorists are confident they've caught NASA in the act of covering up the fact that we are not alone in the universe.

A video posted on YouTube yesterday showed how an image of Saturn's moons Dione and Titan, taken by NASA's Cassini orbiter, had been digitally altered before being added to the space agency's Picture of the Day website.

In the video, "DominatorPS3" turned up the brightness levels on the photo to show that a "huge" object can be seen behind the smaller moon, Dione. Clearly visible are brush strokes that show how the rainbow aura of the object has been blacked out.

"More solid proof of NASA/ government
cover-ups," DominatorPS3 said. "And this is recent. You can do this yourself!!"

Of course, being the Internet, it didn't take long for the truth to get out there, so to speak


The person responsible for the manipulation, Emily Lakdawalla, told a forum of excitable theorists that she made the changes because of the way Cassini takes photos.

"Cassini takes color pictures by snapping three sequential photos through red, green and blue filters," she said. "In the time that separated the three frames, Dione moved, so if I did a simple color composite I would be able to make Titan look right, but not Dione; or Dione look right, but not Titan."

"So I aligned Dione, cut it out, and then aligned Titan," Lakdwalla explained, "and then had to account for the missing bits of shadow where the bits of Dione had been in two of the three channels."

She explained the process further at Planetary.org but it still wasn't enough for the alien hunters, particularly DominatorPS3.

"Thanks for the feedback and explanation," he said in a comment on Lakdwalla's YouTube post. "However I still remain skeptical, because someone still could have ordered her to 'cut it or something out.'"

"But thanks for putting that info up so others can read it; I am not trying to convince people what I believe," he wrote.

LunaCognita also noticed it as well ....

LunaCognita wrote:Wow! You would think that the NASA APOD "Image of the Day" would be cleaned up a bit better than this one from April 20th of this year was. Look to the right of "Dione", the small Moon that is shown here transiting in front of Titan. NASA says they had to create this composite to account for celestial and spacecraft movement that was occurring while they were shooting the different color channel exposures, but the image processing team could have done a much better job of manipulation and cleanup than you see here with this declared composite.

Color-spiked version of the same frame

Here is the link to the original APOD version of this frame
http://apod.nasa.gov/apod/ap100420.html

So it seems creating composited images is the norm ... but it makes me wonder ...

Has the Earth been composited into this picture ? 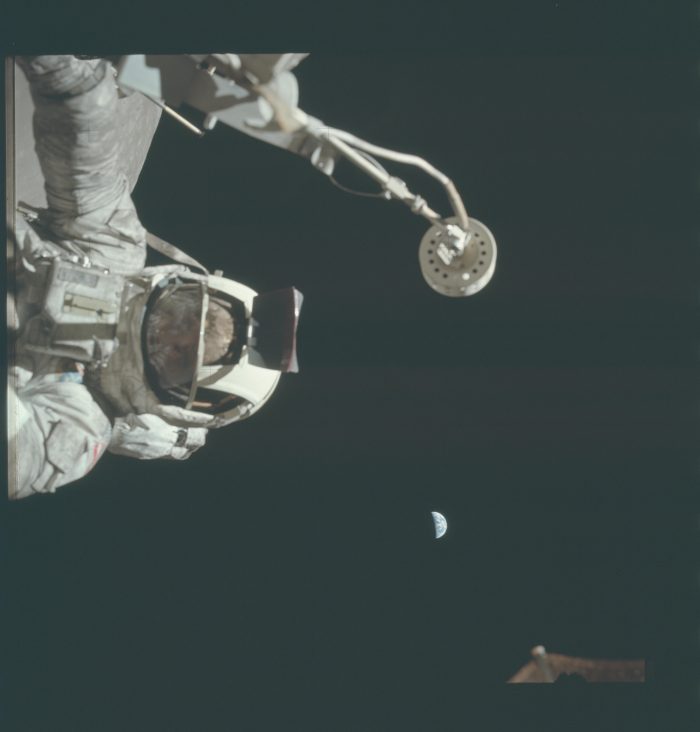 Cropped portion of the enhanced image