Cameron Dive is an Exploration First

@JimCameron has started his descent to the ocean's deepest point. Stay tuned for updates from the deep. #deepseachallenge

Now on the bottom 35755 ft!! Plan is for #Deepseachallenge to spend 4-6 hours on the seabed- take samples....Huge Congrats what a relief!!!

@JimCameron is the first person in history to solo dive to the deepest place on Earth, a record 35,756ft/10,898m #deepseachallenge

He survived! There will be an Avatar II

James.
The man has a pair, Ill give him that. I would have been scared shitless

He survived! There will be an Avatar II

James.
The man has a pair, Ill give him that. I would have been scared shitless

I think Avatar 2 is supposed to have underwater scenes so maybe Cameron will be using some of the video from this Deep Sea challenge in the new movie ? I guess we'll have to wait and see on that eh?

And yeah I'd have to agree, it would have been a scary deal to be down there all alone and wondering if anything might go wrong and no way of knowing what you might run into !

Not sure if your around but there's a live press conference ...
Link - http://deepseachallenge.com/deepsea-challenge-press-conference/?source=link_tw20120325deepsea-pressconf

So basically he spent 9 hours looking at water, sand and shrimp

They would have had to pull me out after sitting like that for so long. I didn't see a bathroom on that thing either. I hope he had some of those astronaut diapers on

Well he will go down in history books if nothing else

They would have had to pull me out after sitting like that for so long. I didn't see a bathroom on that thing either. I hope he had some of those astronaut diapers on

Well he will go down in history books if nothing else

Yeah I suppose a bathroom break might be a problem

I could be wrong but I think he was only down there at the bottom of the trench for an hour or two and the descent and ascent take time as well.

After a faster-than-expected, roughly 70-minute ascent, Cameron's sub, bobbing in the open ocean, was spotted by helicopter and would soon be plucked from the Pacific by a research ship's crane. Earlier, the descent to Challenger Deep had taken 2 hours and 36 minutes.

Cameron during the live press briefing this morning said the trench was a desolate empty place and he compared being down there to landing on the Moon or another planet.

idunno but that's the impression I got from what he said.

Trip to Challenger Deep felt as if he'd "gone to another planet."
Link - http://news.nationalgeographic.com/news/2012/03/120326-james-cameron-mariana-trench-challenger-deepest-lunar-sub-science/

Question: have you guys been keeping up with Joseph Skipper's work on the "Undersea Mystery" ?

In these reports, Mr. Skipper closely examines what our ocean floors look like in Google Earth.
To give you an idea of his findings, here are some quotes from the second article (#224):

In a nutshell someone very advanced has apparently since ancient times been routinely surface mining this planet's ocean floors on an immense scale but in the deepest places that we would normally regard as inaccessible ignoring the many difficulties of working at such depths as though they were no problem at all.

What you're going to see here is the visually distinct track evidence of immense often up to 5-mile wide machines that I believe are combination surface mining dredges and processing plants operating in Earth deepest ocean depths typical of 3,000+ meters or 9,842+ feet to over 6,000+ meters or 19,685+ feet depths. The tracks traverse over huge cracks, up and down cliffs and mountains without course deviations (in straight lines) for hundreds or even thousands of miles as though none of these were obstacles worthy of concern at all. Now that's advanced technology and, if nothing else, that alone must be taken very seriously.

The most telling type of evidence that convinced me to report on this now is on the occasion when these gigantic rigs do make purposeful physical changes in direction of travel including 90º turns, U-turns, pivot turns, angle turns, jockeying back and forth over older tracks, etc. That evidence demonstrates that these rigs are in fact physical constructs deep down on the sea floor and under intelligent control by "someone" rather than imaging or processing false artifacts.

Now that is already very compelling and interesting to say the least, but get this:

The most telling and convincing of this evidence is near the island of Saipan in the Pacific on elevated ridges tops that are still very deep down but also even deeper down as much as 21,000+ feet in the bottom of the super deep Mariana Trench system itself. Present are multiple examples of these immense mobile mines making multiple course corrections including tracks superimposed upon earlier tracks providing the needed proof of intelligent purposeful control and that they are real and not imaging or processing artifacts.

REALLY - is this a coincidence or what? 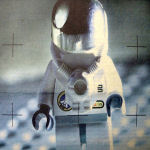 Max thanks for posting the additional info

That topic is indeed interesting