Considering the U.S. Navy has never released any official documents pertaining to unidentified flying objects, there's some interesting reading below about how an unexplained UFO incident over the Pacific Ocean sparked an official investigation by the Office of Naval Intelligence in 1952...the contents of which are still classified.

The incident occurred over the area of ocean between the islands of Guam and Hawaii and involved the aircrews of two separate Navy aircraft witnessing two 'disc shaped' objects which 'circled' their aircraft twice and departed to the East at an approximate speed of 1500 to 2000 mph - on board the aircraft was Admiral Arthur Radford and Naval Secretary Dan Kimball who later convened a conference with the Chief of the Naval Research Admiral Calvin Bolster about making a full investigation of all Navy and Marine UFO reports. 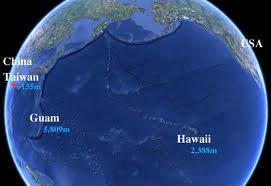 Navy Secretary Dan Kimball was flying to Hawaii when two disc-shaped craft streaked in toward his Navy executive plane. There is no doubt that it it actually happened. In December of 2006 Dan Wilson located an article found in the Blue Book files and Jean Waskiewicz produced a transcript of that article, which can be found at the bottom of this directory.

"Their speed was amazing," he told me later, in Washington. "My pilots estimated it between fifteen hundred and two thousand miles an hour. The objects circled us twice and then took off, heading east. There was another Navy plane behind us, with Admiral Arthur Radford on board. The distance was about fifty miles. I had my senior pilot radio a report on the sighting. In almost no time Radford's chief pilot called back, really excited. The UFOs were now circling their plane---they'd covered the fifty miles in less than two minutes. In a few seconds the pilot told us they'd left the plane and raced up out of sight."

After landing, Secretary Kimball had a report radioed to the AF, since it was officially in charge of the UFO investigation. When he returned to Washington he had an aide ask the AF what action had been taken. He was informed it was against orders to discuss case analyses, even with witnesses who made the reports. In regard to other Navy & Marine Corps reports ...on checking, found that the Air Force had insisted on getting all copies of reports, without even a preliminary Navy investigation. As in his own case, the AF had refused to answer any questions about these sightings, except for a few that were already known to the press, which it later tried to debunk.
As soon as he learned this, Secretary Kimball had a conference with Rear Admiral Calvin Bolster, Chief of the Naval Research. He wanted ONR to make a full investigation of all Navy and Marine reports from then on and also try to get duplicate reports from witnesses in unexplained earlier cases. And this was to be kept separate from the Air Force Project Blue Book 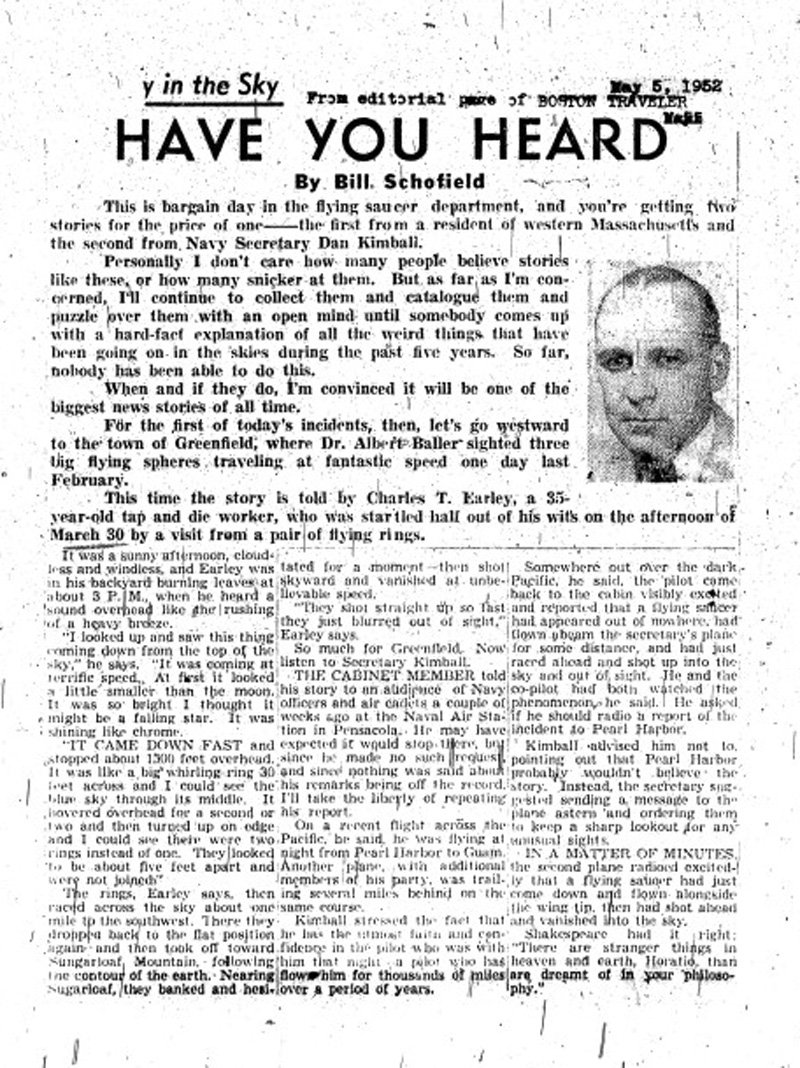 THE CABINET MEMBER told his story to an audience of Navy officers and air cadets a couple of weeks ago at the Naval Air Station in Pensacola. He may have expected it would stop there, but since he made no such request and since nothing was said about his remarks being off the record, I'll take the liberty of repeating his report.On a recent flight across the Pacific, he said, he was flying at night from Pearl Harbor to Guam. Another plane, with additional members of his party, was trailing several miles behind on the same course.
Kimball stressed the fact that he has the utmost faith and confidence in the pilot who was with him that night, a pilot who has flown him for thousands of miles over a period of years.

Somewhere out over the dark Pacific, he said, the pilot came back to the cabin visibly excited and reported that a flying saucer had appeared out of nowhere, had flown abeam the secretary’s plane for some distance, and had just raced ahead and shot up into the sky and out of sight. He and the co-pilot had both watched the phenomenon, he said. He asked if he should radio a report of the incident to Pearl Harbor.

Kimball advised him not to pointing out that Pearl Harbor probably wouldn’t believe the story. Instead, the secretary suggested sending a message to the plane astern and ordering them to keep a sharp lookout for any unusual sights.IN A MATTER OF MINUTES, the second plane radioed excited­ly that a flying saucer had just come down and flown alongside the wing tip, then had shot ahead and vanished into the sky.

Shakespeare had it right; “There are stranger things in heaven and earth, Horatio, than are dreamt of in your philosophy."

The author of the article is Captain Walter Karig, Special Deputy to Chief of Information, U.S. Navy.

This newspaper article discusses the UFO scene as of 1953.

Quote from the article: “Dan Kimball, then Secretary of the Navy, was convinced that “flying saucers” are not figments of the imagination after a UFO buzzed his airplane during a trans-Pacific flight.” 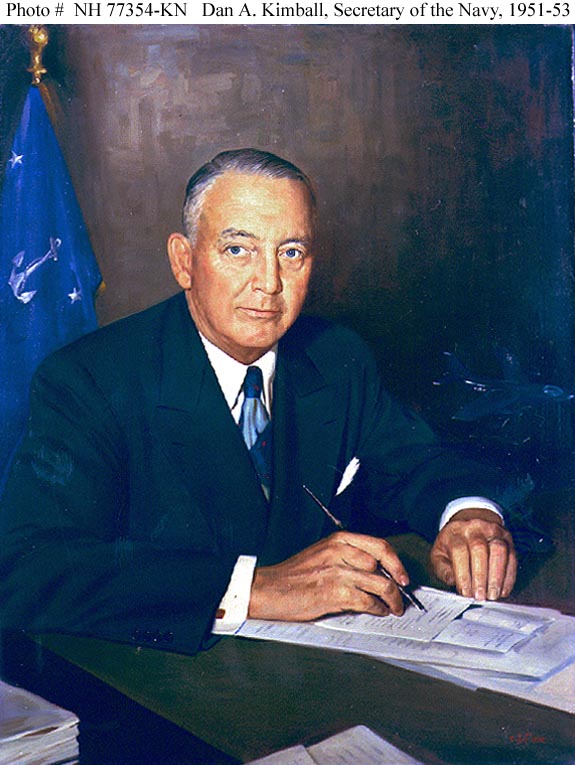 And we know absolutely that another one existed and that it was ordered at the highest levels. This was the study ordered by Secretary of the Navy Dan Kimball, and soon-to-be Chairman of the Joint Chiefs Of Staff, Admiral Arthur Radford, that was precipitated by the close passage of their planes by a UFO in mid-Pacific, and the subsequent blunt uncooperative treatment of the Secretary's aides when they later inquired about the incident from the Air Force. Kimball ordered, through Radford, that a separate Navy file be maintained, particularly of Navy cases, since the Air Force could not be trusted to act in a responsible and civil manner as to openly sharing information as to what was going on.

The Kimball/Radford study was headed by a commander, Frank Lowell Thomas, out of the Office of Naval Intelligence [I think that this is correct, but it could have been ONR instead---these two offices work pretty closely together]. Commander Thomas' study/file went on for an unknown amount of time; it could have been a year, it could have been several. Radford didn't retire from Chairman of the Joint Chiefs until 1957---pretty close to when Keyhoe's informants were keeping their file "with the approval of the Admiral". We don't know if there was any relationship whatever between these two files, or even if they in some ongoing form were the same thing. Whatever the exact situation, one can never say with any honesty that the Navy had no interest in UFOs. And, those early files contained some of the best cases of the era, and would be historically important.

UFOs & The Enigma of the United States Navy

In 1962, former Secretary Dan Kimball and Admiral A.W. Radford were on planes flying between Guam and Hawaii and were circled by two high-speed flying discs. A disc flying around military people of this stature should be the only confirmation required by public, government, science alike to accept that discs do fly and they are not ours. We still have not seen the flight reports. The sighting was confirmed by a U.S. Naval Research, Chief Admiral Calvin Bolster. The full text of the investigation should be released. In addition, other UFO investigations done by Naval Research should be released.

US Navy Office of Naval Research - investigations set up by Secretary of the Navy Dan Kimball after aircraft carrying him and the Chief of Naval Operations Admiral Calvin Bolster were separately "buzzed" by UFOs over the Pacific. Later attempts by Dr. James McDonald to question Kimball and the civilian head of the project failed. Despite numerous requests under the Freedom of Information Act, to date no documents concerning the investigations have been located.

The statistics in the article below about FOIA UFO documents just about sums up the UFO declassification status of the U.S. Navy and Jan Aldrich's article also makes some very astute points about missing US Naval UFO Information including Secretary Kimball's ONI UFO project in 1952:

Ever wonder what the U.S. Government has in their filing cabinets? Search more than 530,000 pages of declassified documents obtained through the Freedom of Information Act (FOIA) and find out..

This section contains batches of documents that have been received from multiple agencies. The FOIA request was for all documents relating to UFOs... the following is what was released:


Office of the Assistant Secretary of Defense [132 Pages]

Wright Patterson Air Force Base [910 Pages] - All documents relating to Project Sign and Grudge[ January through August, 1948 | September through December, 1948, 1949.

The sister Services, Army, USAF and CIA, DIA and NSA have released UFO files as have the British, Danes, French, Brazilians, Australians and even Uruguayans. Now the Russians.
It seems the US Navy’s turn. What specifically? For starters:

3. About 50 AAF and Navy documents formerly TS and below refer to an equal number of other documents on the Scandinavian Ghost Rockets

5. AIR 203 was a Joint TS USAF/Navy study of UFOs. Yet Navy claims no records

6. BurAero analysis of AF document released not by Navy but DOD.

11. The old Hydrographic office was a published source of reports for the US Navy, merchant shipping and aircraft over waters. These were not investigated?

Further, Project Blue Book record indicate numerous contacts thru Air Attaches with foreign govt on UFOs. Naval Attaches have not such contacts even with Navies that UFO significant UFO incidents or Navy UFO project, Argentina, other incidents Chile, Brazil?
In reviews for the Clinton Executive Order declassifying records over 25 years old, Army and AF comes up with hundreds of UFO documents even though these were not specifically required for index. The Navy nada.
“We do not investigate UFOs.”
“We do not keep records filed for such a topic as UFOs.”
“If we had any records on UFOs, they were destroyed.”
“If we had any records on UFOs, we transferred them to the USAF.”
The dog eat my home work. Lost at sea!
Jan Aldrich, Project1947.com

More background info on the Secretary Kimball incident and UFO investigations conducted by the Office of Naval Research in this (very good) E-book.

UFOs and Government: A Historical Inquiry.  Chapter 8 - Tacking Against The Wind

Thanks karl ... that's definitely some interesting reading and intriguing reports.

The Kimball encounter and the flying rings report are both fascinating to say the least.

I'm still studying all this info and right now don't have any NAVY ufo data to post but will certainly keep this topic in mind while researching other subjects.

lol Don't wanna be Mr. negative, .. but I doubt we'll ever see any data from that "investigation".

Especially since the NAVY seems to have played some role in trying to get the public to lose interest in the subject....

(the guy in the video is wearing a NAVY uniform)