Hmm.. not sure I remember seeing this report before, thought I'd post it for study purposes ... 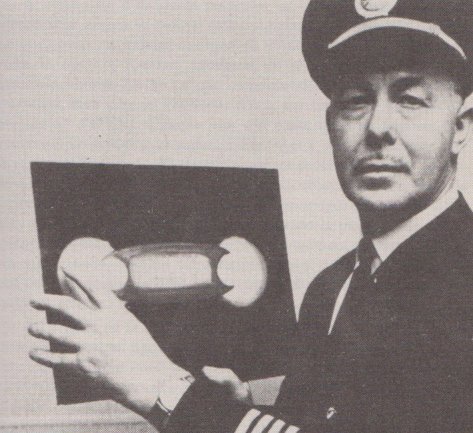 Canadian Pacific Airlines pilots have described one of the best UFO sightings of the winter. The report was not publicized until January but the sighting took place about 1:00 a.m. December 30, during a flight from Lima, Peru, to Mexico City.

Capt. Robert Millbank and his DC-8 jet crew of four other officers were at 35,000 feet off the coast of Peru over the Pacific Ocean. Millbank was the first to see two strange lights ahead and slightly to the left of the airplane. "They were twinkling with the refraction of the atmosphere and at first I thought they might be stars," he told The Columbian.

"Then I could see they were getting farther apart and moving toward us."

Flying copilot with Millbank was John Dennis Dahl, second officer. "Millbank hit my arm and said 'there's something out there,' " Dahl explained. "I looked, and there were two lights, about 60 degrees to the left of our nose and a little bit higher than we were." "They were beams - different from anything I've ever seen, and hard to explain. I thought they looked like beams of energy but I can't say that either. They pulsed, changed colors and changed intensity."

"They came down and into us and kept pace with us for a few minutes, just as though they were having a look at us," Dahl continued. "Then we could see a line of other smaller lights between the bigger ones, in a slight curve." "There was a shape between the big lights and it was unfortunate that it wasn't daylight so we could define it. There would be sparks from one of the large lights and it would get brighter and when this happened we thought we could see a change of direction."

"At the height we were flying, the air is clear - there is no water vapor or dust to reflect a beam of light. And those beams weren't like a searchlight anyway - they were different." "They changed angles. When they were coming closer they were parallel to the ground and when they were keeping pace with us they angled down. They were a sort of bluish grey but they change colors and I can't describe the colors. They were just different."

Millbank explained that if the object had been an airplane the lights would have been red and green. And if it had been a satellite the sighting wouldn't have lasted so long. There was a quarter-moon at the time but it was not possible to judge the distance of the lights or the size of the objects. Dahl said: "If we assume a distance of about 500 feet off our wing tip, it would have been just a little smaller than our aircraft."

After keeping pace for several minutes the lights dropped behind to about 120 degrees and then climbed. During the entire sighting the five members of the crew were on the flight deck looking out at the strange lights from several windows. The passengers were all asleep in the cabin and were not awakened. "We moved around from one window to another," said Dahl, "and the beams always looked the same, so it wasn't refraction or reflections we were seeing."

At one time Captain Millbank took the plane of automatic pilot because it looked as if the object "might come right in and intercept us." He filed a report of the sighting on landing in Mexico City.

Dahl, who was with the Royal Canadian Air Force for eight and one-half years, attached to an interceptor squadron, said the lights "were foreign to us." Asked, "Do you think they were foreign to this planet?" he replied, "Yes - I'm convinced."