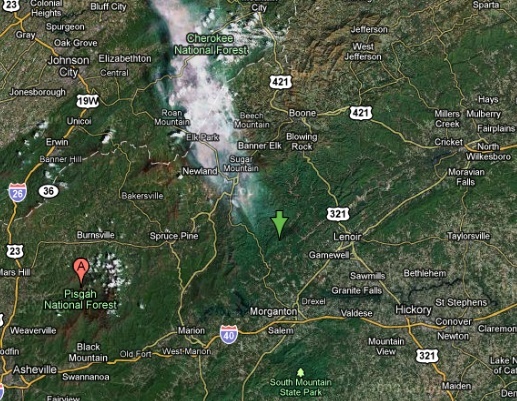 
CHARLOTTE, N.C. – The mysterious twinkles called the Brown Mountain Lights, for centuries the subject of folklore, scientific intrigue and starry-eyed fascination, are headed for the great crossroads of fact and fiction: the Web.

And Appalachian State University astronomer Dan Caton, whose real work is studying binary stars, hopes to shed his distinction as the foremost expert on something he's never actually seen.

Mr. Caton plans to install a Web cam, a video camera that sends images to a Web site, in hopes of capturing the dots of light that dance across the dark hills on the Burke-Caldwell county line.

He reckons that 95 percent of the claimed Brown Mountain sightings are bogus. The few that interest him can't readily be explained by headlights, campfires or stray light from stars.

He suspects a phenomenon called ball lightning, a moving, glowing gas that's so poorly understood it can't be produced in a laboratory. Earth lights, as they're sometimes called, have been reported around the globe.

The Brown Mountain Lights are one of the most famous of North Carolina legends. They have been reported a dozen times in newspaper stories. They have been investigated at least twice by the U.S. Geological Survey. And they have attracted the attention of numerous scientists and historians since the German engineer, Gerard Will de Brahm, recorded the mysterious lights in the North Carolina mountains in 1771.

"The mountains emit nitrous vapors which are borne by the wind and when laden winds meet each other the niter inflames, sulphurates and deteriorates," said de Brahm. De Brahm was a scientific man and, of course, had a scientific explanation. But the early frontiersman believed that the lights were the spirits of Cherokee and Catawba warriors slain in an ancient battle on the mountainside.

One thing is certain, the lights do exist. They have been seen from earliest times. They appear at irregular intervals over the top of Brown Mountain - a long, low mountain in the foothills of the Blue Ridge. They move erratically up and down, visible at a distance, but vanishing as one climbs the mountain. From the Wiseman's View on Linville Mountain the lights can be seen well. They at first appear to be about twice the size of a star as they come over Brown Mountain. Sometimes they have a reddish or blue cast. On dark nights they pop up so thick and fast it's impossible to count them.

Videos of the phenomena: