YAKIMA, Wash-- A new study finds Yakima has one of the highest UFO reporting rates per capita. Popular Mechanics released the study, it shows by county the number of UFO sightings reported from 1947 to 2005. 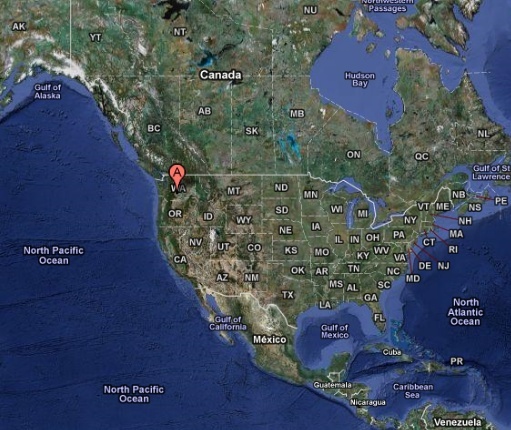 Washington State has certainly had its share of UFO reports and virtually everyone interested in the phenomenon is aware that the whole flying saucer craze was started by Kenneth Arnold's 1947 encounter, which actually took place not too far from Yakima. A long series of "UFO-like" reports, in many ways similar to the Piedmont UFO reports, took place on the Yakama Reservation, not far from the city of Yakima located in south-central Washington State (the tribe name and city name are different by one letter). While the number of these reports peaked in 1972-74, the phenomenon continues to this day. Also notable is the fact that highly scientific research on the Yakima phenomenon began during the peak years, and the research continues despite some setbacks. Although there have been fewer scientists involved in the Yakima studies, in some ways the research is more important than that at Piedmont.

The Yakama Tribe, like many others, has legends and an oral history that seemingly takes the UFO-like activity on their reservation well back into time. For example, they have stories of "little people" known as "stick Indians" and legends of light forms. However, the earliest documented UFO report that I can find from Yakima comes from 1957.


The Yakima reports also include a handful of "close encounters" with humanoids, odd mental phenomena, and strange creatures. And there are many cases that appear to show that the lights interacted with the observers, precisely as was the case at Piedmont. In essence, what the Yakima research certainly demonstrates is that something very real does manifest and we have yet to determine precisely what that is. My long-term hunch, which remains my best hypothesis, is that a plasma-like energy is involved.

The Yakima UFO Field project was undertaken by me in August of 1972 at the request of Dr. J. Allen Hynek. The study has continued to this day.

"The light moved so fast that it gave the impression of a streak. It would appear stationary for a moment, then, almost instantaneously, appear some distance away (typically 10 degrees of arc through 7x50 binoculars). After another brief pause, it would dart back in the opposite direction. When stationary, the object appeared through the binoculars as an intense pinpoint of white light."


"The object appeared as a pair of lights moving in a definite, periodic pattern. The color of the light emitted by the object was reddish-orange. Because of the repetitive nature of the light pattern and the fixed relationship of the lights to one another, the observers felt that the lights must have been attached to a body or fuselage of some sort and spinning around this body. The structure would have been about the size of an F-27 airliner, according to the estimate of one observer. Figure 1. shows schematically the pattern traced by the lights. The object was at an elevation of about 0ø relative to the observers, since the observation point is on a hill overlooking Granger. The lights of Granger were also clearly visible under the object."

The Study is named in honor of the late Willard J. "Bill" Vogel, a supervisor in the Fire Control Division on the Yakama Indian Reservation, near Toppenish, Washington USA. Although NL observations on the Yakama Reservation and surrounding areas had been reported for many years, Mr. Vogel was the first to recognize the nocturnal lights and other unidentified phenomena on the Reservation as a physical reality and legitimate subject for more careful study. He supported his arguments for a serious inquiry with numerous photographs, log books, and eyewitness reports from a number of credible observers.

HISTORY OF UFO PHENOMENA IN THE STUDY AREA

Activity recognizable as classical UFO phenomena has been present in the Toppenish area for more
than eight years. There is even some evidence to suggest that UFO reports are a part of Yakima Indian
legends. A detectable increase in activity has taken place in the last three years. Reports have recently
been made by law enforcement personnel from the Washington Stare Patrol, County Sheriff and
reservation Law and Order department. Formerly, fire lookouts had been the primary source of reports.
A majority of observations are made at night and consist mostly of the typical "nocturnal light" (NL)
phenomenon described by Hynek(1). Primary characteristics of this particular phenomenon include:

1. Generally bright light, larger than a point source.
2. Colors reported cover the entire spectrum, but most
usually are yellow-orange.
3. Kinematics are not attributable to balloons,
aircraft or other natural objects and often give
the appearance of intelligent action.

The NL in the Toppenish study area have generally conformed to the above description. The
Toppenish manifestation does seem to differ slightly in that it is frequently observed on or near the ground.
Predominant colors range from brownish-orange to pure white. Investigation of prior NL activity in the
study area revealed that a few daytime observations have been made. These daylight sightings are very
rare and have ranged from "fuzzy" appearing "blobs" to well-defined, metallic colored, disk shaped objects
of the classical "flying saucer" variety. There was also one ten year old report of a physical impression
made in the ground by an UFO.

REPORT ON THE INVESTIGATION OF NOCTURNAL LIGHT PHENOMENA
AT TOPPENISH, WASHINGTON, AUGUST 1972


In 1981 I began an investigation into UFO sightings that had occured over 20 years in a single area, the Yakima Indian Reservation in south-central Washington state. In the early 1980s, the MUFON UFO Journal published several of my papers based on my preliminary findings. Now the J. Allen Hynek Center for UFO Studies has published my complete findings as a book: EXAMINING THE EARTHLIGHT THEORY: The Yakima UFO Microcosm.

Nearly every part of the Reservation experienced some type of unexplained event over a 20 year period, making the Yakima Indian Reservation an excellent "laboratory" for detailed examination of UFO phenomena. 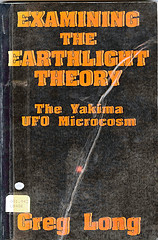 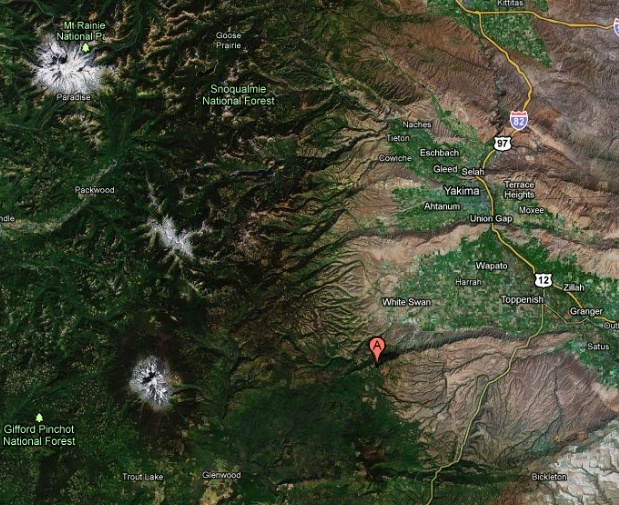 The Yakama Indian Reservation is a United States Indian reservation located on the east side of the Cascade Mountains in southern Washington. It is the homeland of the Yakama tribe of Native Americans. 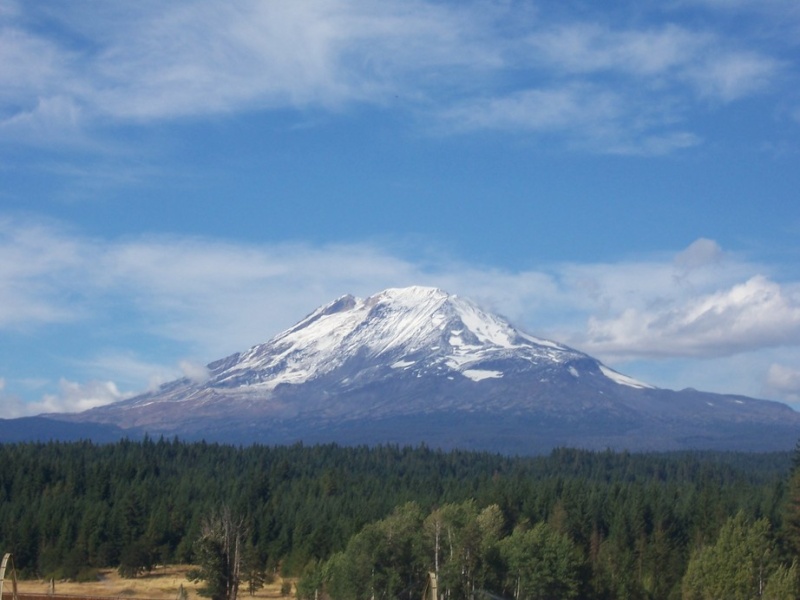 Mount Adams is a potentially active stratovolcano in the Cascade Range and the second-highest mountain in the U.S. state of Washington. Adams is a member of the Cascade Volcanic Arc, and is one of the arc's largest volcanoes, located in a remote wilderness approximately 31 miles (50 km) east of Mount St. Helens. The Mount Adams Wilderness comprises the upper and western part of the volcano's cone. The eastern side of the mountain is part of the Yakama Nation

Re: The Yakima Washington UFO Phenomena