Really interesting case from Holland, Michigan on March 8th, 1994 (9 months before the Trumbull County UFO flap) where 'panicked' citizens flooded 911 operators with UFO reports from around Lake Michigan and police officers who were dispatched to investigate also witnessed the objects - the case also made international news due to the National Weather Service Radar Station picking up very strange radar returns in the same area (and at the same time) as the UFOs were being witnessed.

Professor Michael Swords makes some very interesting comments about the radar data in the video below, explaining how the returns were at least as bright as commercial aircraft 'but four times bigger', he also mentions how the object was originally plotted at 18000ft but within 15 seconds it ascended vertically at a speed of around 1000mph - also how the UFO broke from one object into three objects (which he describes as 'fundamentally mysterious') .

On the evening of March 8, 1994, residents of Southwest Michigan began seeing strange things in the skies over Lake Michigan to the south of Holland. Blue, white, red, and green lights, sometimes attached to cylindrical objects, and sometimes performing unusual maneuvers, were reported.

911 operators began receiving calls at around 9:30 p.m. about something that looked like "a string of Christmas lights way up in the sky." It wasn't just a few people reporting these things; it was counties all up and down Lake Michigan. Some sources said 300 witnesses, including several police officers, saw the lights.

There were so many reports that one of the Ottawa County 911 operators decided to call the National Weather Service radar operator at Muskegon. The conversations that 911 had with the NWS operator were taped and later made their way into the media. The radar operator's voice could be heard describing abrupt movements of the object and multiple objects appearing on the radar screen..

BACKGROUND VOICE: Presumed at NWS: Coulda been a plane.

911: One of the people that called that I just had happened to talk to said it looked like a bunch of cylindrical objects...

911:...they were going together and coming apart.

Professor Swords also provides more info below about the CUFOS investigation into the case and the UFO's movement on the radarscope - there are also reproductions of eye-witness UFO sketches and inevitable claims of witness harassment. 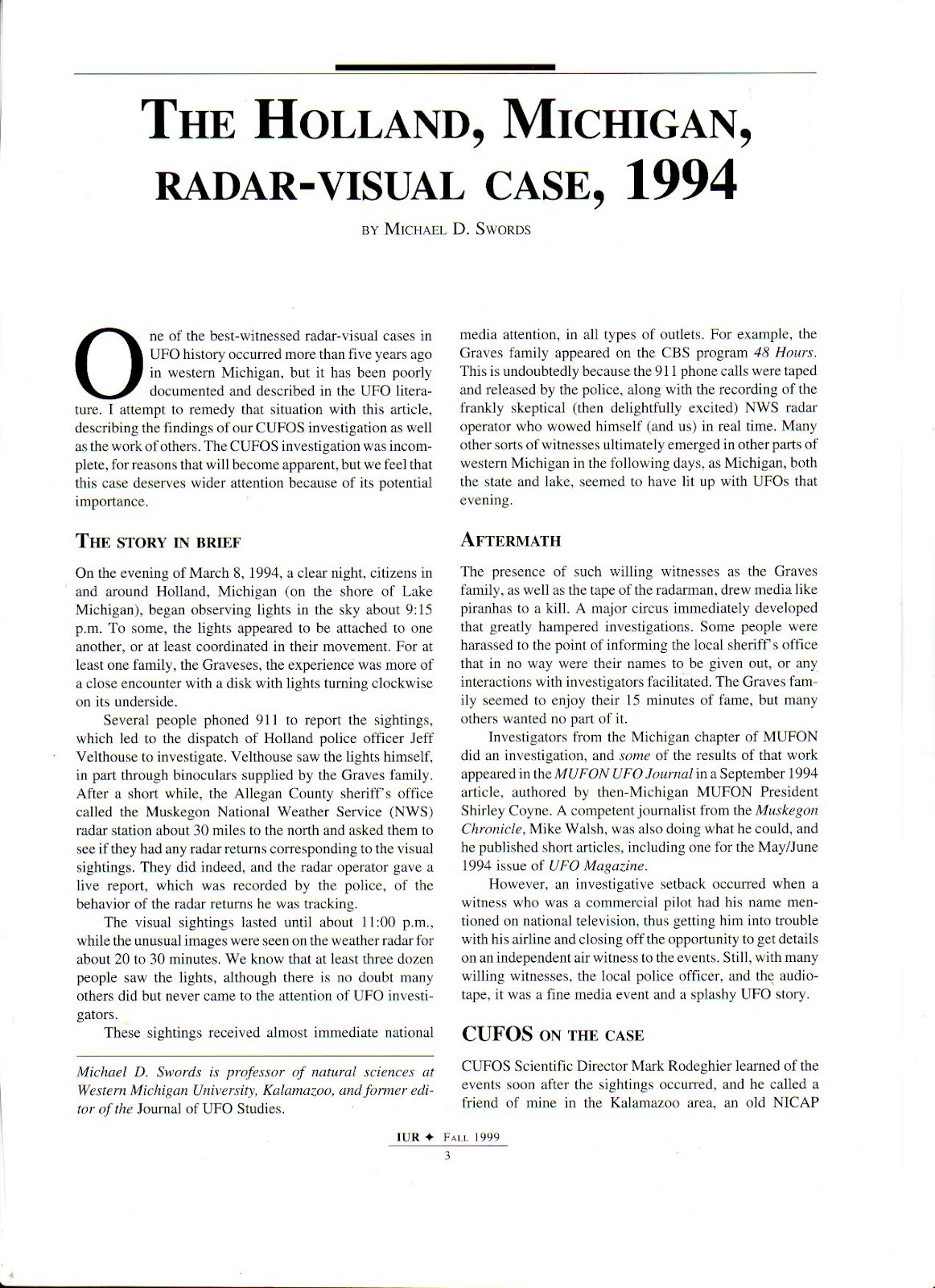 Relevant articles about the case which mention the police/town resident UFO sightings and describe something big and 'really strange' over the town of Holland - also brought up is the simultaneous radar tracking and different estimated speeds of the objects. 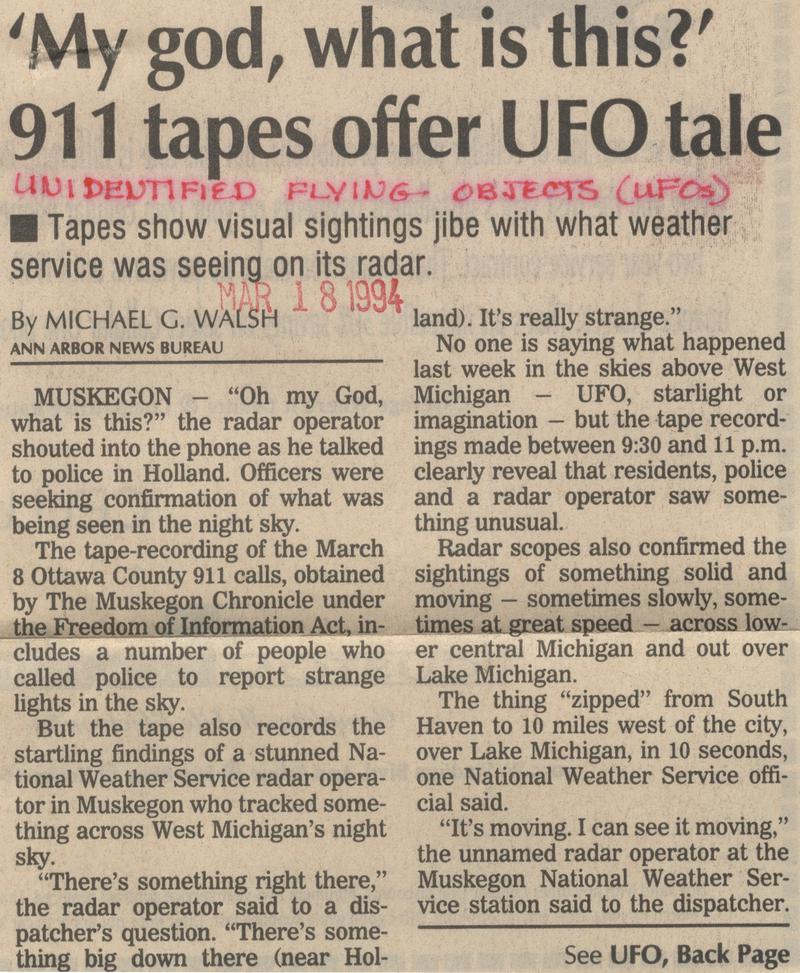 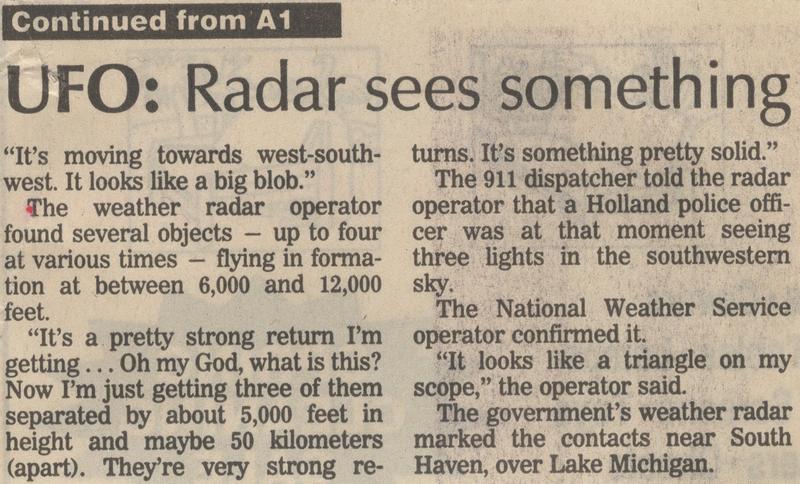 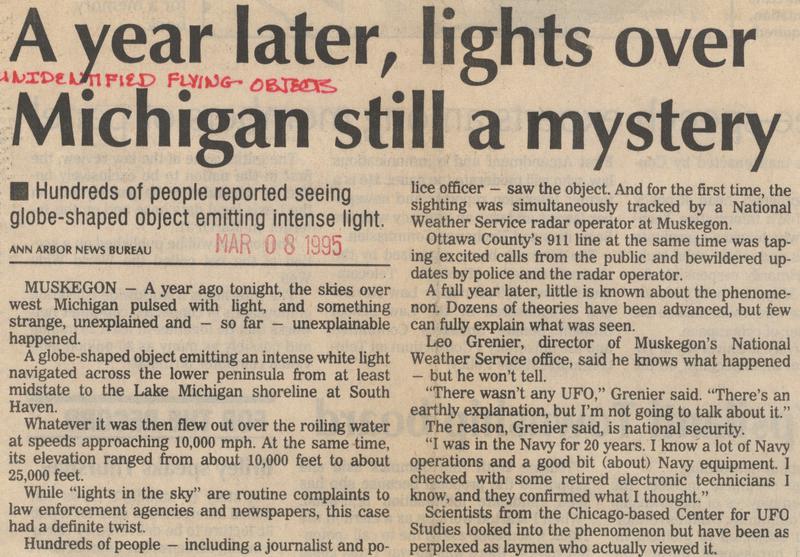 There's also some intriguing info here about a BIMUP Investigation and how hundreds of other UFO reports came in from the surrounding area in the following days - also mentioned are some alleged documents which raise these points:

This section goes on about how the radar replication reports were acquired and additional information reported that was not made public during the flap of March 8, 1994. Some of the additional highlights are:

• Several minutes before the 'objects' appeared on the exhibit radar printout, other objects were tracked by sophisticated sites across the United States.


• The first group of 24 objects approached the west coast of California from the southwest over the Pacific Ocean and appeared to be on a course toward Lake Michigan.


• At about the same time, a group of 14 objects were tracked approaching the south east from Florida and an additional group of 24 objects approached from over the Alaska and the Northwest Territory of Canada, also appearing to be headed toward Lake Michigan


• Simultaneously, a group of 12 objects appeared approaching from the East Coast of the United States coming from the north east and were observed at Loring AFB.


• All the groups actually converged at a point approximately 52,000 feet above the north central portion of Lake Michigan.

Another news article about the case with witness testimony from Randi Murphy who stated she saw the object just above tree top level making 'a soft, whirring sound'.


Also another report which mentions 'the hottest case in the country' with one eye-witness estimating the UFO as being 50 feet long, cigar shaped and round: