When it comes to pilot sightings, there's a pretty remarkable incident described at the links below in which three 'domed discs' flew alongside a private aircraft over Lake Tequesquitengo in Mexico, May 3rd, 1975.

The case has lots of interesting factors including a daylight close range pilot sighting, electromagnetic interference effects and witness intimidation but perhaps the most intriguing is the radar confirmation of the objects by Mexico City Airport flight control who reported three unexplainable radar blips near his plane executing sharp manoeuvers - later on, the control tower staff also confirmed three objects 'merging into one' and speeding towards Mount Popocatepetl.

There's an written interview below with the pilot in English but unfortunately the pilot transmission and video interview are in Spanish so if anyone wants to help with the translation it would be very much appreciated. 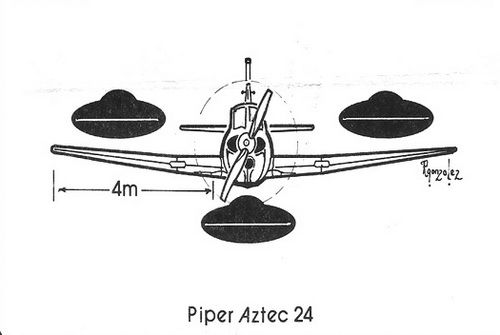 1:34 p.m. local. Carlos Antonio de los Santos Montiel, 23, was flying a Piper PA-24 from Zihuatenejo to Mexico City at about 15,000 feet (4.5 km). While passing over Lake Tequesquitengo, he felt a strange vibration in the plane. Then he saw to the right, pacing alongside, a 10-to 12-foot (3 meters) in diameter disc with a dome on top. Another appeared to the left of the plane, and a third disc appreached head-on, dropping beneath the plane. Carlos felt a jolt as if the object had collided with his plane. He pulled the landing gear lever, but it failed to operate. The plane felt as if it were being pulled or lifted, and the controls refused to re­spond. Although badly shaken, Carlos notified Mexico City by radio, describing what was happening. At the same time air control radar was showing unexplained objects near his plane that were capable of sharp turns, unlike normal aircraft. Finally their blips merged on the radar screen and sped away toward Mt. Popocatepetl. After the objects left, Montiel was able to lower his landing gear manually and to land safely. Aviation personnel who know him testified to his sobriety and trustworthiness. 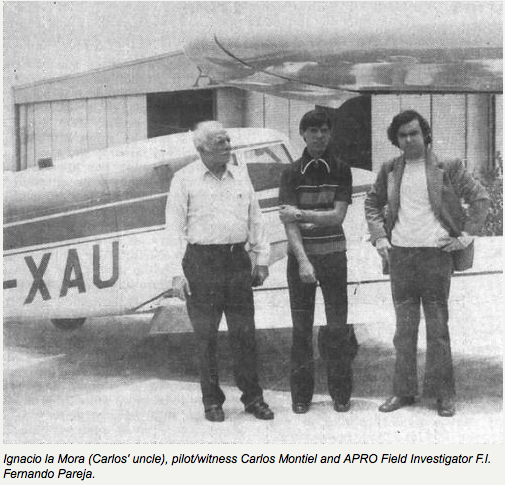 Airport Terminal Radar Controller, Julio Intrian Diaz, registered the blip of Carlos's plane on radar, the UFO executing a 270-degree turn in a radius of three or four miles at a speed of 450-500 nautical m.p.h.

In the free E-book below by Rubin Uriarte it states that, as well as the radar confirmation from two different flight controllers, there was also a report of a separately located witness piloting a Government Lear jet who also witnessed the three objects hovering around the other aircraft - there's also two interviews with the pilot of the Piper PA-24 (Spanish and English) as well as a good summation of the case from Patrick Gross.

Nearby, a Learjet aircraft registered as XC-SAG and in use by an agency of the Mexican Government made visual contact with De Los Santos' plane and the three mysterious objects hovering around it. The pilot of the Learjet radioed back to the Mexico City tower to confirm what he had seen.

Perhaps one of the most shattering UFO events of the year 1975 involved the near-abduction of pilot Carlos de los Santos Montiel as he flew his small aircraft over Central Mexico. The case received worldwide attention and Mr. de los Santos told his story to a number of major researchers and at several UFO conferences. Thirty-five years after the event, Ana Luisa Cid reopens the case..

ALC: Did the UFOs cause you any physical harm?

Carlos Antonio: No, considering that they were only 2 meters distant from me, suspended over the small plane’s wings for 18 minutes.


ALC: Were you punished for going public with your experience?

Carlos Antonio: No. When someone said on TV that my pilot’s license had been revoked and that I’d vanished, it was all a lie.


ALC: Why did you fly to Zihuatanejo? The likeliest course of action would have been to stay at Lazaro Cardenas, your original location, before returning to Mexico City.

Carlos Antonio: Because I didn’t like that town and the nearest one (by private plane) was Zihuatanejo, Guerrero..


ALC: What are your thoughts about the incident, 35 years later?

Carlos Antonio: Well, it was something I experienced and it was real. An incident that I am still at a loss to explain. I don’t know where they [the objects] came from, or what their intentions were. Sometimes I think they were curious and that they approached us for this reason, although it could also be that they saved me from some unpleasant situation. The small plane looked good, but it was very old, from 1958. So who knows? Maybe it was about to stall in mid-air, or I was about to lose a wing or the tail section. Or have some other accident...I don’t know.


ALC: Did the objects remove you from your route?

Carlos Antonio: No. I remained within the air corridor. What they did was lift me higher, which is dangerous, since my cabin wasn’t pressurized.


ALC: What do you say to those who claim you suffered from hypoxia and that you “imagined” all of this?

Carlos: Well, they don’t know what they’re talking about. When you experience hypoxia you feel sick, naturally. You’re dizzy and your visual field shuts down, but you don’t hallucinate.


ALC: In some illustrations of sketches that you allegedly made, I see that the 1975 UFOs had an antenna on their upper part. Is this correct?

Carlos Antonio: This is not correct. They had no antennae. They had opaque grey fuselages and a sort of windshield, but without rivets and completely smooth. I’m going to draw them for you (makes drawing). And don’t think that it’s the only incorrect item of evidence circulating around there. I’ve also seen the date set down incorrectly. Some put May 2nd and other May 13. Not at all – it was May 3rd, 1975. What I would like to make clear is that my personal and professional reputation is safe thanks to the testimony of air traffic controllers. They had the three objects on their screens, making 270-degree turns in a very tight radius of action.

What we have here is a case where almost all of the aspects of the UFO problem are involved.

This is a UFO observation report by a pilot.

This is a UFO close encounter.

This is a daylight UFO observation.

This is case were the reported UFOs are observed at close sight and are solid objet of obvious artificial construction.

This is a report of a near air collision between an aircraft and UFOs.

This is a report of UFO that have a behaviour which is suggesting intelligent control.

This is a case of physical effects on an aircraft.

This is a radar/visual case, where a visual sighting is confirmed by independant people detecting the presence of the objects on a detection device.

This is a case where the UFOs fly away in direction of Mount Popocatepetl, obviously a hotbed of UFO reports and allegedly some sort of hideout for extraterrestrial aircraft.

This is a case where a pilot reports his encounter publicly.

This is a case where the witness has been medically checked and interviewed. If Hynek could not speak to Los Santos Montiel, at least Jerome Clark and others could.

This is a case where the witness stood firm with his account over time.

This is a case where the witness reports that he has been repeatedly intimidated by unidentified people probably from a foreign country (UFO folklore call them "Men in Black").

karl thanks for posting, this case is very interesting

Here's a talk radio interview with some researchers and the pilot ...

Not sure if this is relevant or not (or real) ... but allegedly 1 month prior, someone got a couple pictures of an object that sorta fits the description of the UFOs reported in this May 3rd case ?? 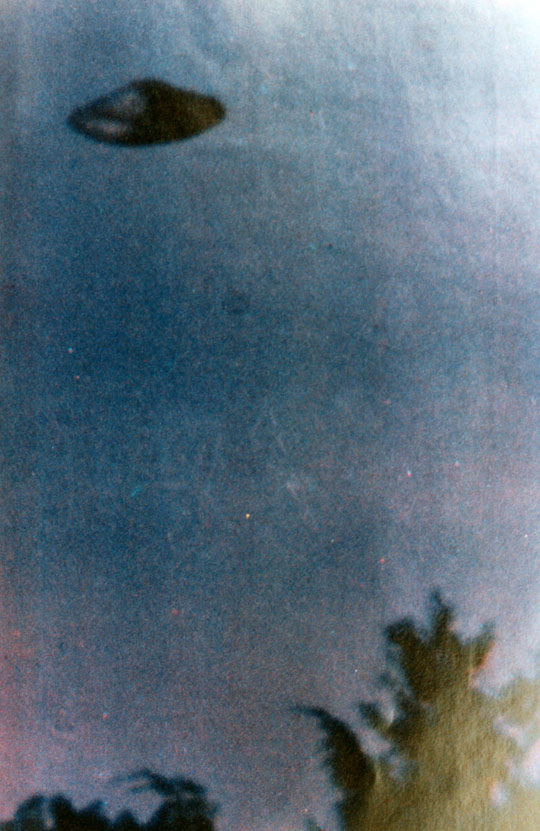 Engineer, Sirenio Garcia Chavez took 2 photographs on April 12th, 1975, at about 13:30, after lunch, of UFOs over the ex-Hasienda de San Juan Ixtilmanco, in Hidalgo state of Mexico. The presence of the two flying discs above the delapitated shell of the old hacienda is indisputable. The objects were not seen at the time by Garcia Chavez, nor by either of the two neighbors seen in the complete picture. Upon analysis, the objects in the two photographs were calculated to be some 8 meters in diameter and some 40 to 20 meters respectively from the camera. Courtesy Zeta Rodriguez and REVOISTA OVNI

Case presented in this video ...

Ha thanks very much for posting that vid mate, looked everywhere for it but the ones I found had the same title with the incorrect episodes on.

Certainly is an extremely interesting case this one (never any cynical input from pathological debunkers) - am off to watch!

karl 12 wrote:Ha thanks very much for posting that vid mate, looked everywhere for it but the ones I found had the same title with the incorrect episodes on.

Certainly is an extremely interesting case this one (never any cynical input from pathological debunkers) - am off to watch!

Sure no problem bro, glad it helped and Yes I agree it's an extremely interesting case.


Yeah  I noticed the chronic denialists ignore cases like this.

Guess it's too much for them to deal with or they don't want to give it any attention because more people will see it then.

Thanks again karl always good to hear from you!