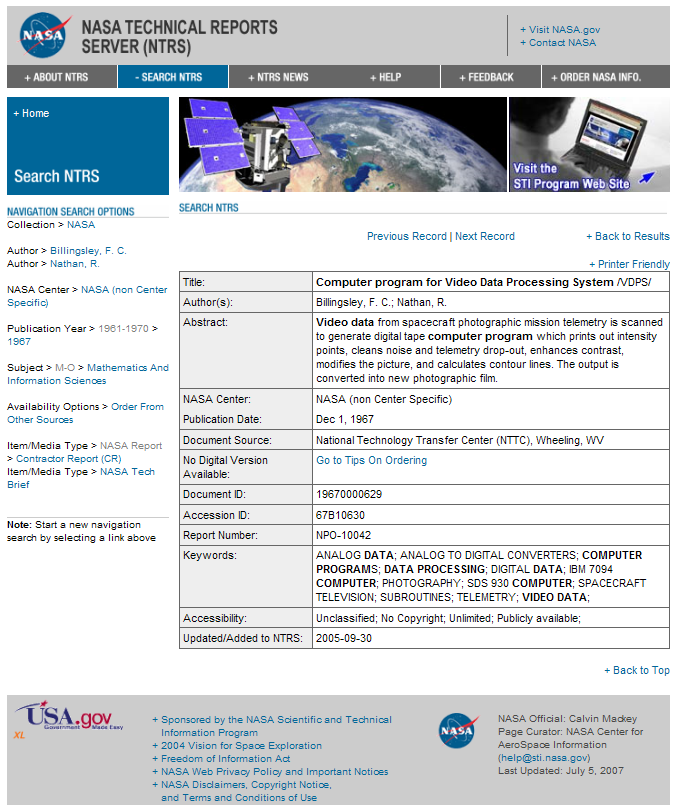 That paragraph all by itself confirms the capability of digital scanning frames of film, manipulating them, then OUTPUTTING THE MANIPULATED VERSION BACK TO PHOTOGRAPHIC FILM! Those are the three primaries required to begin pulling the imaging scan off digitally. What NASA claims is *ahem* "raw" film is nothing of the kind. It is exposed film that has been scanned, manipulated digitally, then spit back out on photographic film to appear like it is "raw"

These two pages are from a BellComm document published in 1968 called ....

"Digital Interpolation and Magnification of Pictures" 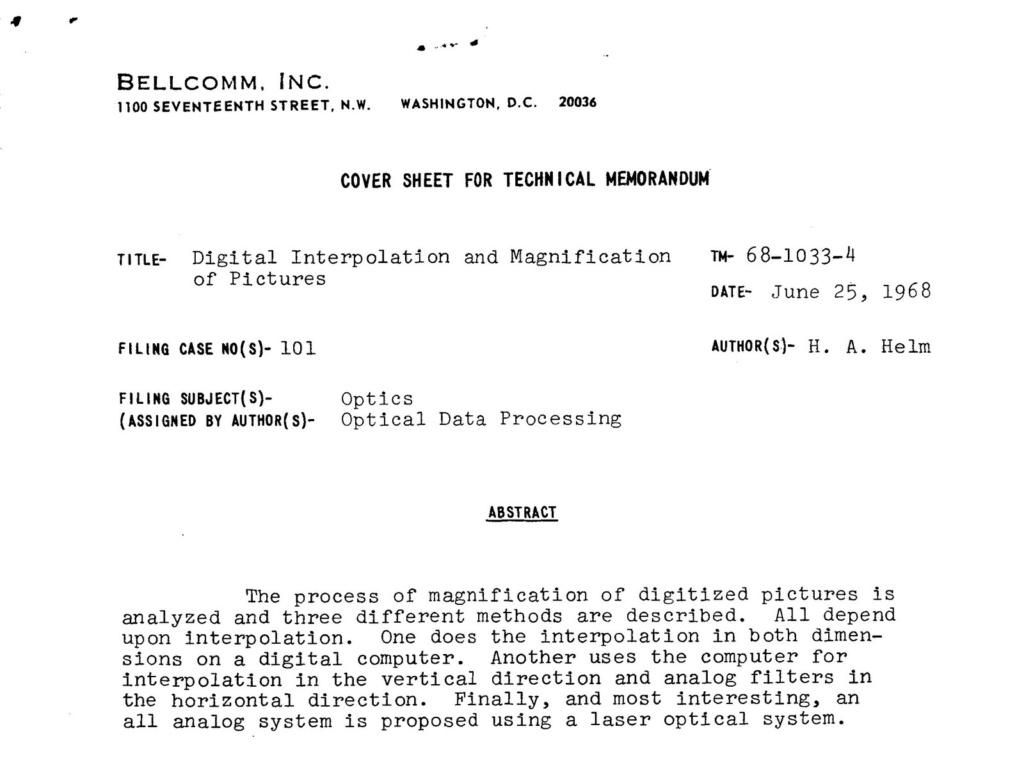 Page 11 - Section 1 - System Description
The Image Display and Manipulation System (IDAMS) Processor provides the user with an open-ended capability for performing a variety of operations on a large-scale digitized pictorial image (up to 5000 lines of 5000 picture elements per line). it consists of a modular package of analytical tools (task programs) that can be used to enhance manipulate and analyze pictorial information from a satellite or other photographic source. Specifically the IDAMS Processor provides support for the Earth Resources and Technology Satellite (ERTS) program. 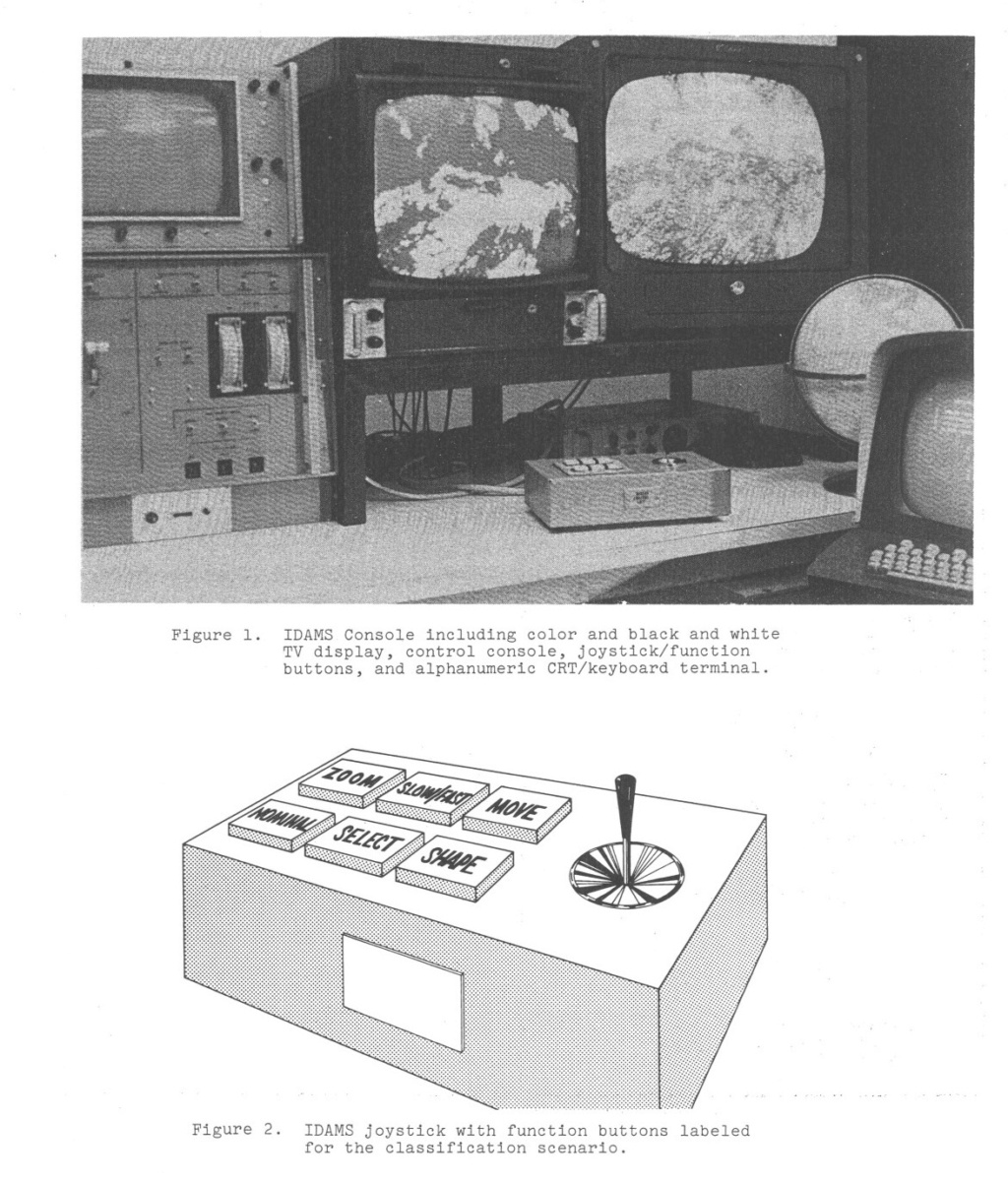 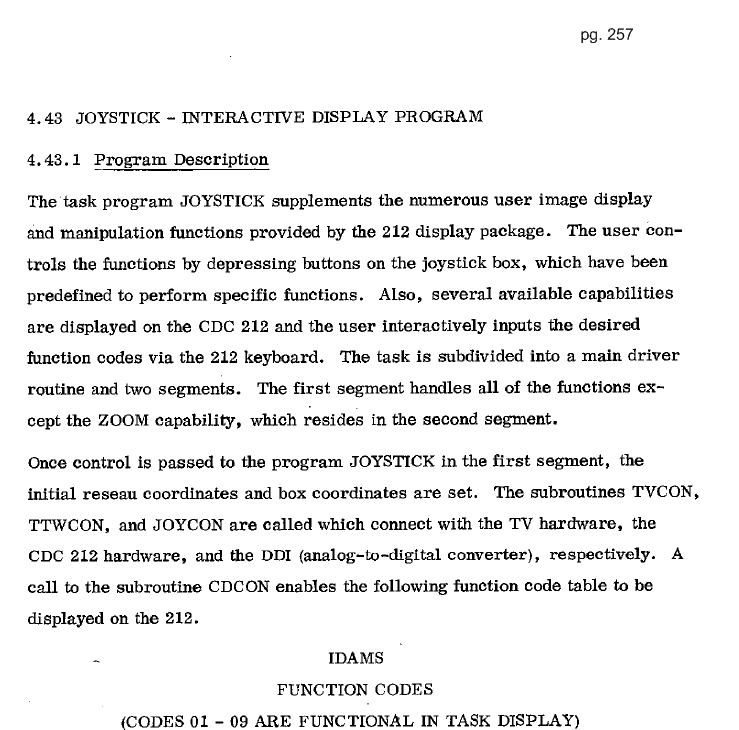 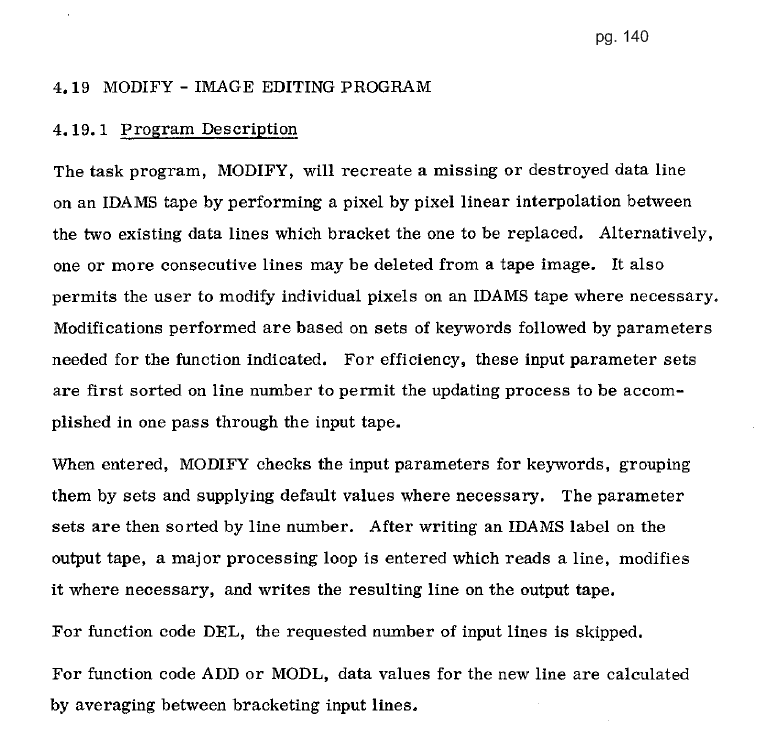 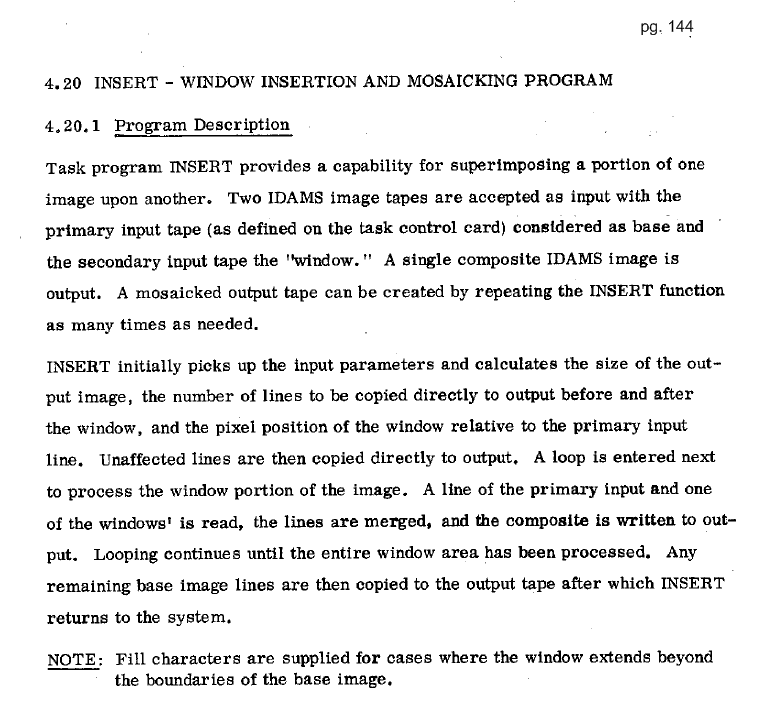 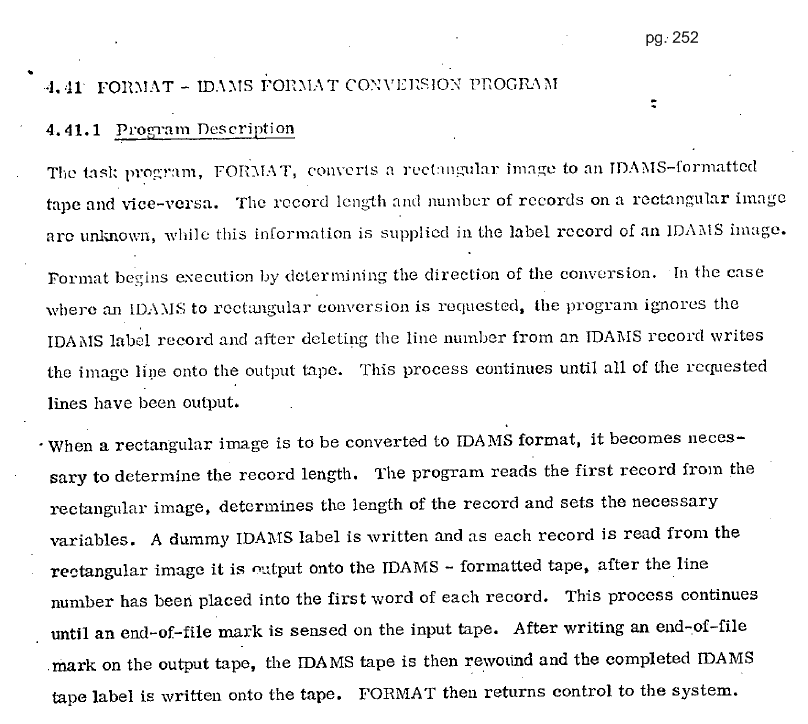 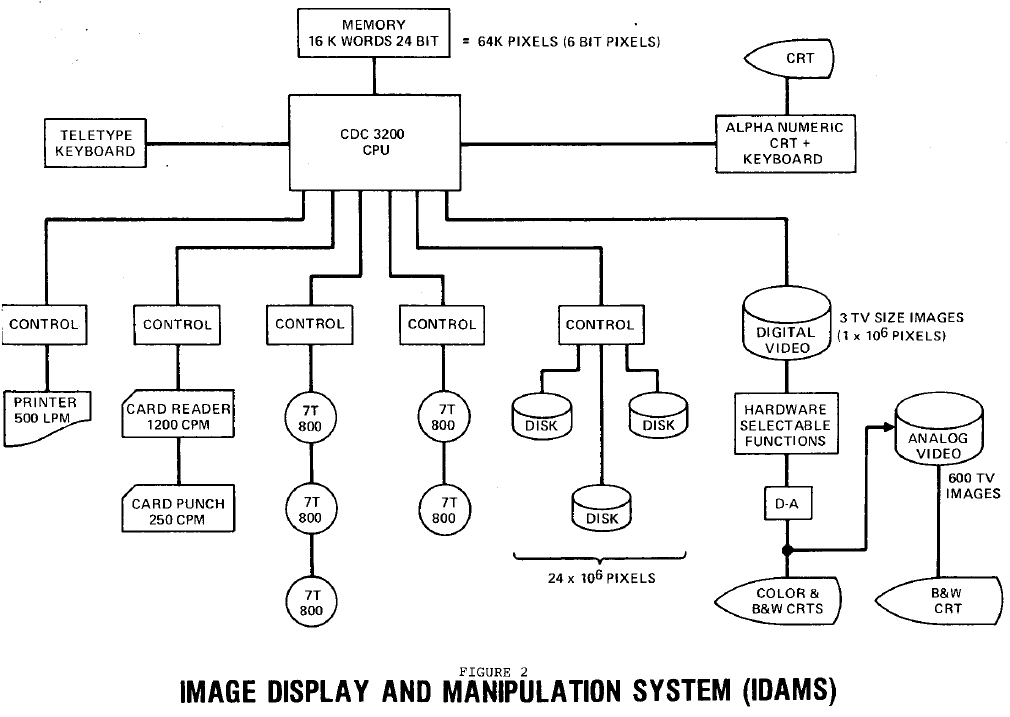 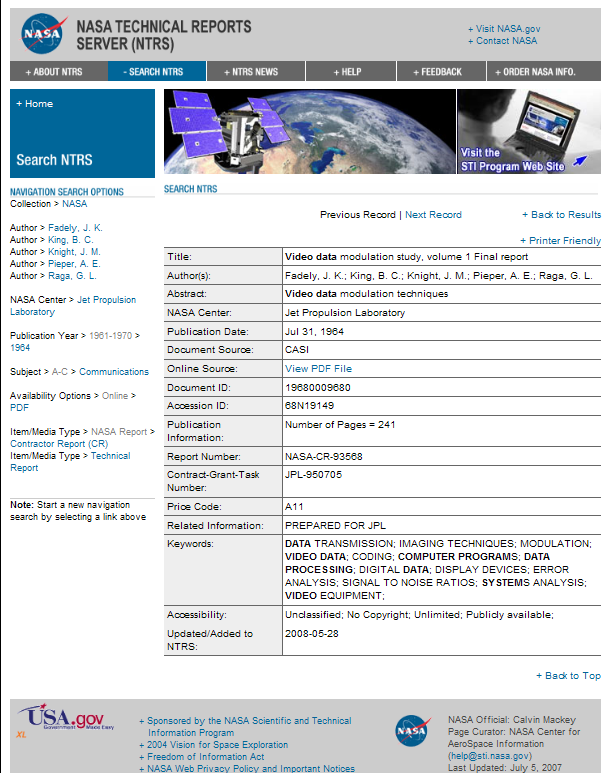 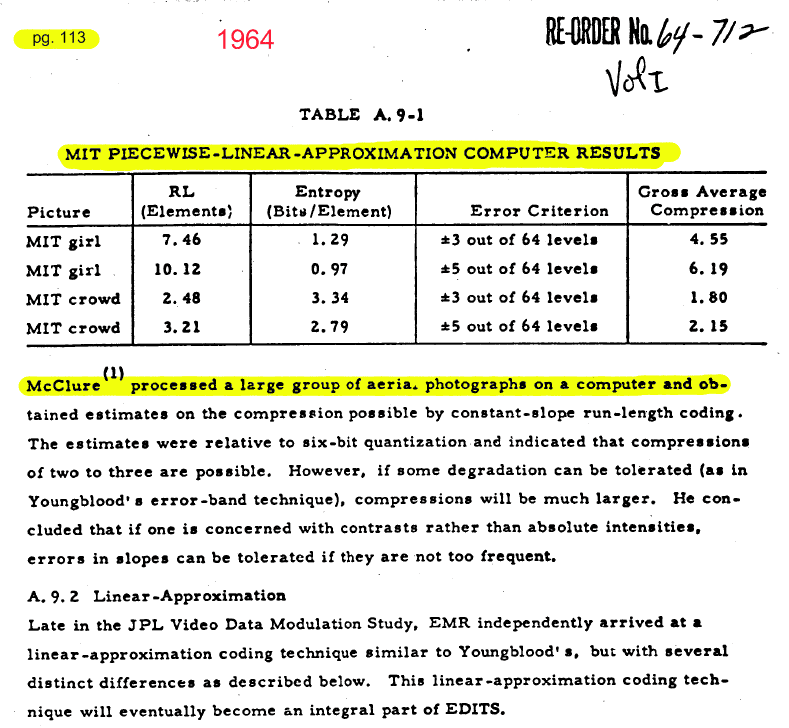 VICAR, which stands for Video Image Communication And Retrieval, is a general purpose image processing software system that has been developed since 1966 to digitally process multi-dimensional imaging data. VICAR was developed primarily to process images from the Jet Propulsion Laboratory's unmanned planetary spacecraft. It is now used for a variety of other applications including biomedical image processing, cartography, earth resources, astronomy, and geological exploration. It is not only used by JPL but by several universities, NASA sites and other science/research institutions in the United States and Europe.

VICAR is a set of computer programs and procedures designed to facilitate the acquisition, processing and handling of digital image data. The VICAR image processing language was defined by JPL employees Stan Bressler, Howard Frieden and Fred Billingsley, and implemented in 1966 at the Jet Propulsion Laboratory to process image data produced by the planetary exploration program. The software package was originally designed for operation with the IBM 360/44 Programming System (44PS) and was later modified to run with the IBM OS/360 operating system.


This document is from 1974-1975, so keep in mind they are basically describing tech that was used during Apollo. Incidentally, this same document was also published in 1974, but this copy is from 1975. The title of this document (actually, it is a "Technical Memorandum") is "Man-machine interactive imaging and data processing using high-speed digital mass storage" - written by Rob Nathan, the JPL imaging guru.

Although this is a tech memo that was published just after the Apollo Program, you will see that it directly references the use of the "VICAR" system as a primary digital image manipulation tool, and VICAR was being used back even before 1969  Here is a website where they list VICAR as being 1960s tech as well. http://www-mipl.jpl.nasa.gov/external/vug/vug3.html

"At the Image Processing Laboratory (IPL) of JPL, we employ a general purpose digital computer (IBM 360/44) utilizing an extensive special purpose software system (VICAR) to perform an almost unlimited repertoire of processing operations. This approach has proven to be most flexible, versatile, and suitable for experimental work."

"The processing and enhancement of images are controlled by the operator/scientist matching his perceptual needs to optimally adjust the instrument. Central to the near real time image processing is a high speed digital solid state mass memory operating at input/output speeds compatible with standard TV rates. Thus, the operator, as the most important link in the loop, is provided with a real time interactive display which enables him to perceive the remote workspace as required to execute remote manipulation tasks."

Now, in this same document, Nathan also describes the Digital Image Integrator and the Digital Image Recorder, which were part of the frame-stacking setup, and he mentions how they had the ability to capture TV streams digitally, then manipulate and enhance, running at 60fps. He describes the process as "frame-grabbing" in this document - which was an early term applied to the idea of digitally capturing individual frames of footage. On page 11, Nathan says...

By continuous application of the video signal to the input of the DIR, the system will operate as a multiple additive frame grabber or integrator. Television systems can be used to augment. The frame integration time, or the number of frames accumulated, is controlled by an acquisition timer. How quickly the memory is filled (saturates) depends on the signal levels received limitation normally causing signal deterioration.
from the camera system...The interesting and significant aspect of frame integration is the improvement in signal-to-noise ratio in near real time which can be materialized.

This whole document is excellent, and it is quite short. It has a bunch of image examples showing raw and enhanced scenes and some Fourier transforms as well, although the reproduction quality of the PDF imagery is not the greatest (though I have seen FAR worse quality PDF scans before, and you can still see a bit of the improvement). [/quote] 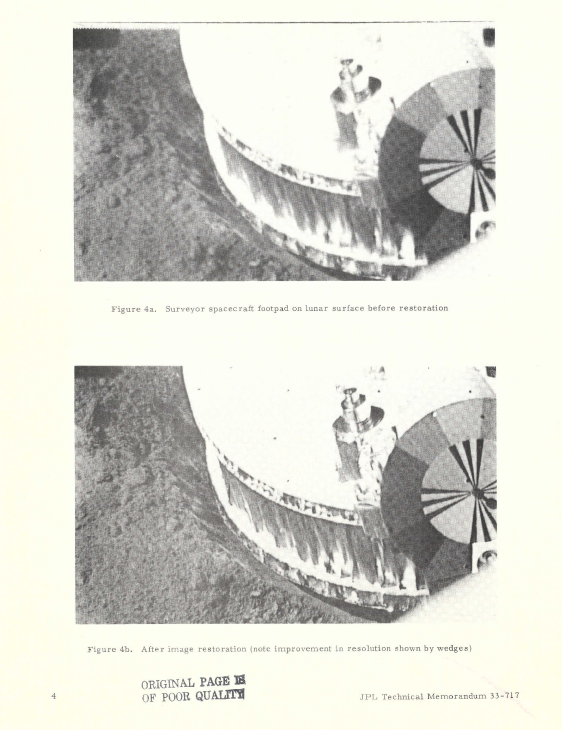 
From the link referenced above:

VICAR is a set of computer programs and procedures designed to facilitate the acquisition, processing and handling of digital image data. The VICAR image processing language was defined by JPL employees Stan Bressler, Howard Frieden and Fred Billingsley, and implemented in 1966 at the Jet Propulsion Laboratory to process image data produced by the planetary exploration program. The software package was originally designed for operation with the IBM 360/44 Programming System (44PS) and was later modified to run with the IBM OS/360 operating system. In the early 1980's VICAR underwent a major revision to run under the VMS operating system on the VAX series of Digital Equipment Corporation computers. Now, in the early 1990's, VICAR is once again undergoing a major revision and will soon be fully operational under both the SunOS and Solaris UNIX operating systems. 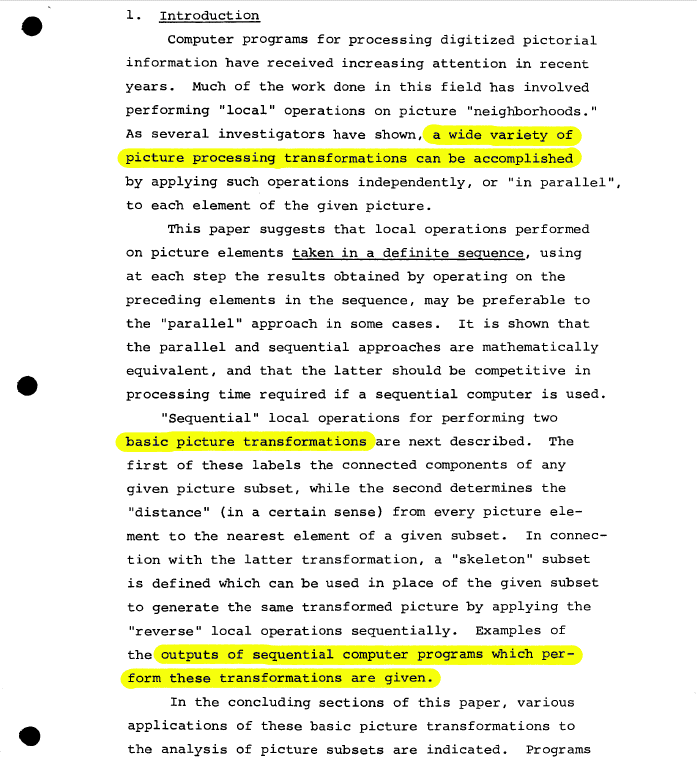 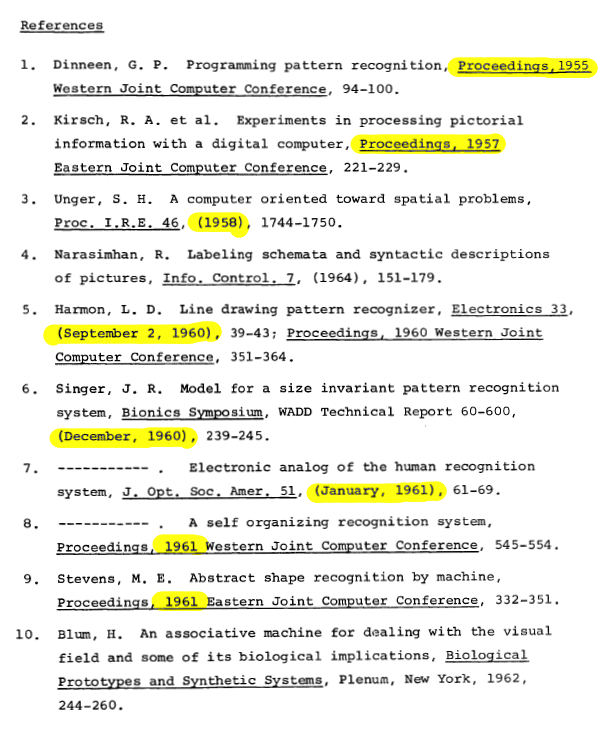