As the late Richard Hall mentions below, there was a pretty intriguing series of UFO incidents over sensitive military installations during the last days of January, 1976 and there's quite a detailed close range sighting report found in one of the National Military Command Center documents about an object described as '25 yards in diameter, gold or silver in color with blue light on top, hole in middle. and red light on bottom' over the flight line of Cannon Air force base in Clovis, New Mexico on the 21st of the month.

It appears Air Force "security measures" provided no protection against the "invasion." One month later, on January 21, 1976, UFOs "25 yards in diameter, gold or silver in color with blue light on top, hole in middle. and red light on bottom" were observed "near the flight line of Cannon AFB. N.M."Ten days later, on January 31, a UFO was observed near a radar site at Elgin AFB, Florida. On July 30, 1976, a UFO was observed "over the ammo storage area" at Fort Richie, Maryland.

The above accounts have numerous historical precedents. From 1948 through 1950, an FBI document reveals, UFOs were sighted by "persons whose reliability is not questioned," near highly sensitive military and government installations, including nuclear weapons design, construction, testing and stockpiling sites. Security officials were greatly alarmed by these incidents.

A CIA document reveals that in 1952 "sightings of unexplained objects at great altitudes and travelling at high speeds" were reported in the vicinity of major U.S. defense installations and posed a threat to national security.

The evidence is clear and convincing that the Federal government has systematically misinformed the American people about the real threat to our national security posed by such UFO encounters.

Is the CIA Stonewalling? by Richard Hall 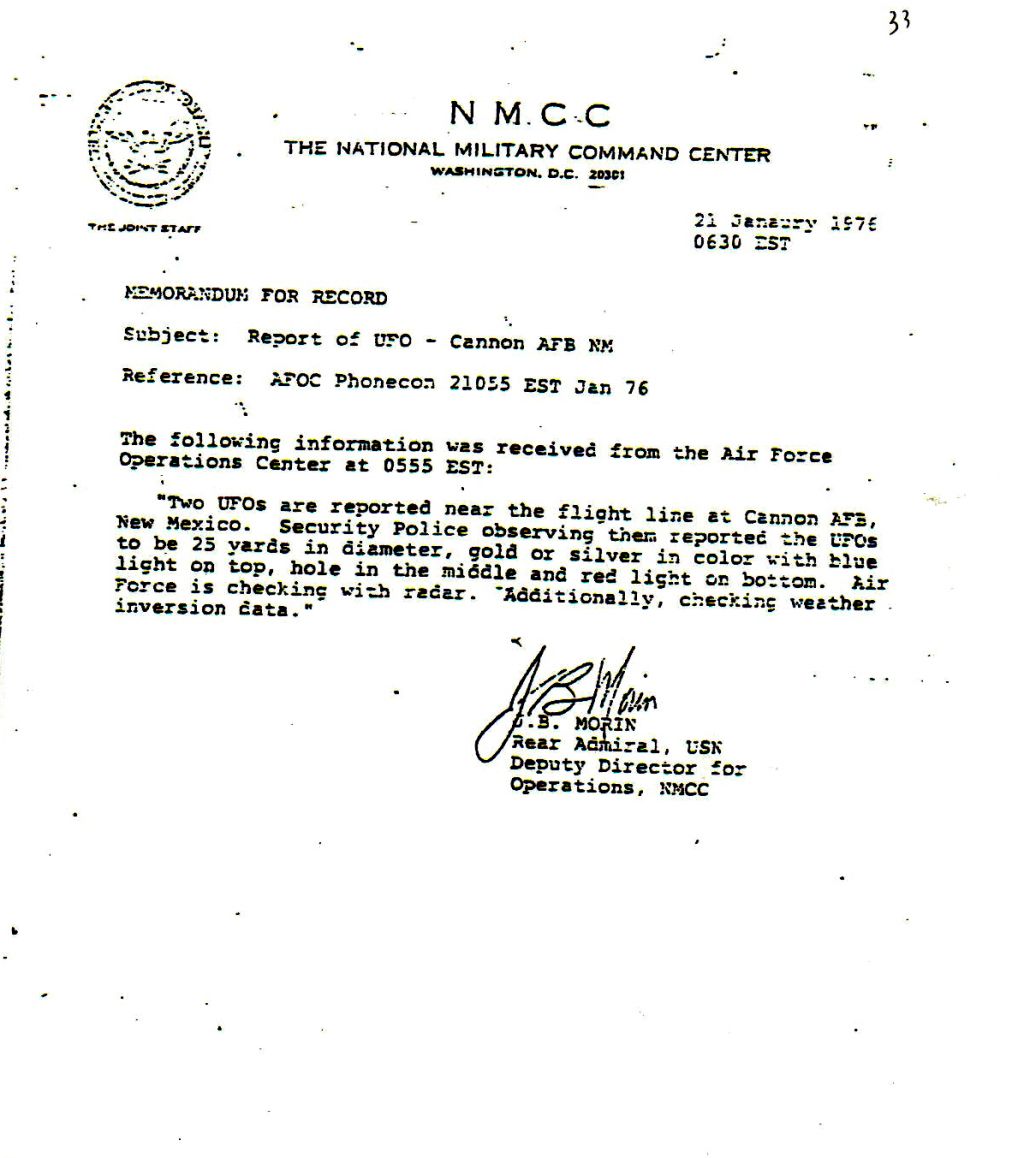 Sometime before 3:55 a.m. MST. NMCC Memo: The following information was received from the Air Force Operations center at 0555 EST: "Two UFOs are reported near the flight line at Cannon AFB, New Mexico. Security Police observing them reported the UFOs to be 25 yards in diameter, gold or silver in color with blue light on top, hole in the middle and red light on the bottom. Air Force is checking with radar. Additionally, checking weather inversion data." (Actual FOIA document) Among other UFO researchers who arrived in Clovis were several members of the "UFO Study Group," which has about 40 members, mainly employees of the Los Alamos Scientific Laboratories ­ the facility where the atomic bomb was developed in World War II. Police said scores of sightings were reported between 6 p.m. and 10:30 p.m. Friday an hour before the Los Alamos observers arrived.

Police officers also stated there were 'scores' of sightings reported between 6 and 10:30 on the same night and it seems the more a person looks into the local news archives, the more (separately located) reports there seems to be. Below are some of the articles describing the UFO sightings by town residents and police witnesses over the two day period, also mentioned is the possibility of radar confirmation and photographs of the objects.

Reports of the sightings have increased steadily since the first night. Most of the reports have been of faraway objects, but Town Marshal Willie Ronquillo of Texico said he followed a silent object about 300 yards over his car. Ronquillo said the object, which had green, yellow and blue lights, sped away at a high speed to the north. Lenore Hildebrand of the UFO center in Wisconsin said Jim Epps of Valley Center, Calif., would arrive in Clovis. She said an Air Force officer from Clovis called the center Friday night and told them he "had a very close sighting and was able to witness a type of vehicle that did maneuver and that was unlike any type aircraft he has ever seen."

Johnson (police officer Randy Johnson) said radar at Canon Air Force Base had reported seeing only one blip on its screens during the sightings. He said the air base and the FAA at Tucumcari, N.M., had ruled out the possibility of weather balloons or aircraft.

Most of the objects seen Thursday night (22 January) and early today were spotted west of Clovis, with a few to the east and north. Similar sightings also were reported at Portales, N.M., and Plainview, Tex.

Johnson said the objects were generally spotted in groups of three in a straight line.”

There's also testimony describing jets being scrambled to intercept the objects .. as well as some pretty freaky reports of witness intimidation, burned circles in the ground and cattle mutilations:

On Jan. 22,1976, the strange objects zipped around Cannon F-111s that were sent into the air to investigate them, according to testimony that appears on Vike=92s Web site. The objects darted out of the reach of the jets, cutting through the air at 90-degree angles, and racing at phenomenal speeds, the Web site reads.

A CNJ staff writer reported seeing 23 UFOs, sliding in and out of complex formations, the next night. Also, an unexplained circle was burned into the ground of a New Mexico ranch and a cylindrical object of unknown origin was discovered in the grass in the days following the initial UFO sightings, according to CNJ archives.

This report is one of a few sighting reports I have received from ex-military serviceman who worked out of the Cannon AFB. All the men filed reports on seeing numerous unknown objects over the AFB back in January 1976. I have a list of military people who operated out of the Cannon AFB and I am writing to each and everyone of them in hopes they might be able to shed some more light on this major event. If possible that is.

I was working the Security Police Desk that night at Cannon and was the one that called the report into Base Operations. A few days later I also spoke with an individual from Washington DC. I don't recall his name or department. The first report was from Sgt Whitt, who was stationed on the outer perimeter of the flight-line. After that, several reports came in from Base Patrols. I talked someone into handling the Desk for me so I could have a peek. I was allowed into the flight tower and looked at the objects (about a dozen or so) through a Starlight Scope. Flight Ops was concerned enough to scramble 2 F11's to give chase. Around midnight several of us went up onto the highway overpass and cut the overpass lights for a better view. We watched them until almost dawn.
About that time there were also several burned areas in farmer's fields surrounding the Air Base. I saw two of the circles. The burned circles were approximately 30 feet across and had a dead cow in the center. All the flesh was burned from the cow, but no blood was on the ground or apparently in the cow. Some of the cows had neat, clean burned out cavities in the abdomen about a foot in diameter, and a foot or so deep.

A civilian, near the airbase, spotted a UFO hovering extremely low over a half completed hospital that was being constructed on the base. The civilian called the radio station I worked for and reported it. The disk jockey called the news director for the station and he called the control tower at the base (whose phone number was supposedly not available) for confirmation. He was told by a controller that they not only saw it on radar but had visually confirmed it also. He then reported this to one of the news services who ran the story in the middle of the night..

Cannon AFB UFO Story: "Why Did You Do It?"

This event was for me a culmination of about 2 weeks of unusual activity during my duty as USAF personnel at Cannon AFB, NM. Preceeding this, there were reports of cattle mutilation near Gallup. I personally interviewed at least 20 witnesses. While minor details of the craft would vary - and a few of the descriptions were of a small red sphere - the basic description/behavior of the main sightings were virtually identical. I also spent an evening interviewing a family of 5 who spent the previous evening watching the "silver discs" hovering over the field behind their house in Clovis.

Our shop dispatcher immediately called Job Control, upset that our weekend would likely be postponed as we waited for the aircraft to land and likely land with repairs needed. ((name and rank deleted)) hung up the phone and told us that the launch was no training sortie - it was a "hot scramble". This means the aircraft were launched with live ordinance!! When we inquired as to why, he said they were tracking bogeys.

Again, I ran out to the loading dock platform and began scanning the skies. I saw nothing. I went back into the A-shop waiting area and ((name deleted)) recalled that a buddy of his was the radar operator on duty. We called the "radar shack" and got him on the phone.
He said he had never seen anything like this. The bogeys would appear and disappear, seemingly without cause and would occasionally move at incredible speeds over and near the base. We asked him if it could be a radar malfunction. He said "negative" - the radar was in perfect working order and he had run diagnostics. He also was a seasoned operator and I do not believe it was an error on his part (after all, we DID scramble two $26,000,000 aircraft after something). I jotted down the phone number to the radar shack - on the off chance...

While waiting for the phone to ring in the transmitter shack he noticed a number of pin-point lights popping up in the sky which appeared to look like light-bulbs on a string. Two of them dropped downward until they reached a lower altitude, stopped and hovered. The lights were seen between his location and the Airforce Base at this time. While watching these strange objects Bruce grabbed the pair of binoculars he had with him.

He describes the two lower lights as the classic saucer shaped craft and they had a bluish glow to them with a red radiant glow on the bottom side of the craft. A small dome shape could easily be seen at the top of each of the two objects. In his estimation he believes the objects may have been at least 30 to 50 in diameter. The two objects were hovering parallel to one another and then started to move off at a slow rate of speed in perfect formation heading towards the airforce base.

Bruce said he followed them with his binoculars for approximately 15 minutes. The objects flew past a number of buildings which were at the edge of the base and they proceeded to climb in altitude as to where they again looked like a small light in the clear night sky. Bruce said it looked as if the lights on, and in, the buildings were dimming due to the objects being in close proximity. Later after talking to base personnel, this proved to be true, the lights had dimmed, and the objects were noticed by the base personnel.

Bruce called the station as he was excited to talk about what he had just witnessed. Some of the other people at the station had also been watching the events unfold that night. Through Channel 3's connections they heard that the objects were widely seen by many that night and by the state police. An article was written on the objects seen that January..

karl this is a very interesting case, thanks for posting

Here's the blog page with the picture supposedly taken a day or two later:
Link - http://the-v-factor-paranormal.blogspot.com/2010/11/ufo-filmed-from-clovis-new-mexico-and.html

Can't seem to find the radio interview from the Rense program but I'll keep looking.

Maybe you have already found it ?